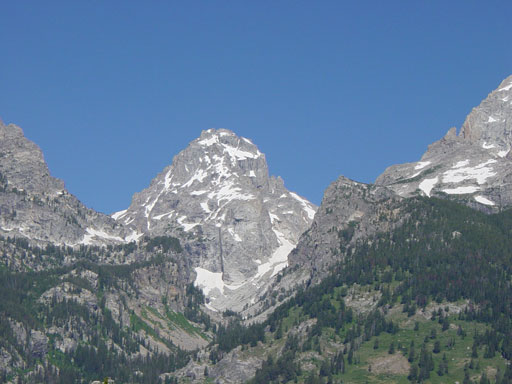 Middle Teton is one of the three great Teton peaks for which Grand Teton National Park gets it's name.  Located in the center of the Teton range, Middle Teton is flanked by the more famous Grand Teton to the north and the South Teton to the south.  All three offer different challenges, each a little harder than the next.  After Jackie and I climbed the Grand Teton in 2002, the other peaks in the area were too good to pass up.  So with Eric from Oklahoma in tow, we left Granite Peak, Montana and headed south to meet Jerry from Virginia and climb the Middle Teton.   The Middle Teton is not as challenging as Granite Peak or the Grand Teton, but it offers a wonderful day of climbing in a beautiful alpine setting.  Here we go! 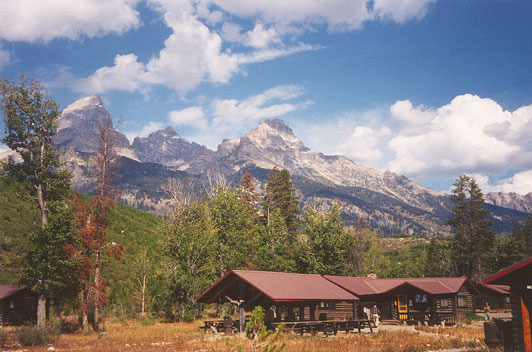 This is the American Alpine Club Climbers Ranch.  We stayed here for a couple of days resting after our Granite Peak climb.  It's a little rustic...don't expect room service or even a mattress.  But it's cheap, cozy, and look at the view! 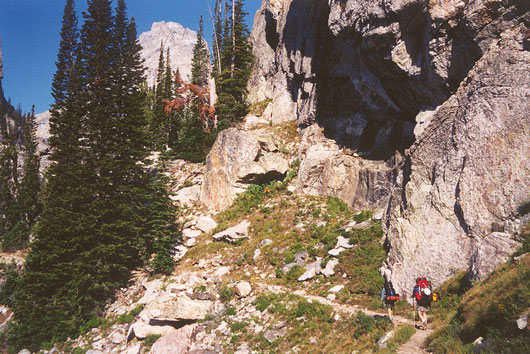 The hike in to our base camp began at the Lupine Meadows trailhead and climbed up and into Garnet Canyon.  In this photo, Alan and Jerry head up Garnet Canyon with Middle Teton in the background. 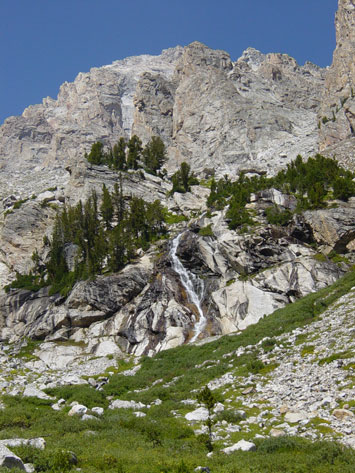 Once we arrived at our base camp in the Meadows, we were greeted by great views of Spaulding Falls.  The Exum Ridge of the Grand Teton is high above on the skyline.  With a name like the Meadows, you might expect there to be lots of alpine flowers in the area.  High altitude flowers like Alpine asters, Bergenias, and Boltonias are found in the Western U.S., but are not often used in Avas Flowers arrangements or bouquets.  There are some great Avas Flowers offers online for floral enthusiasts. 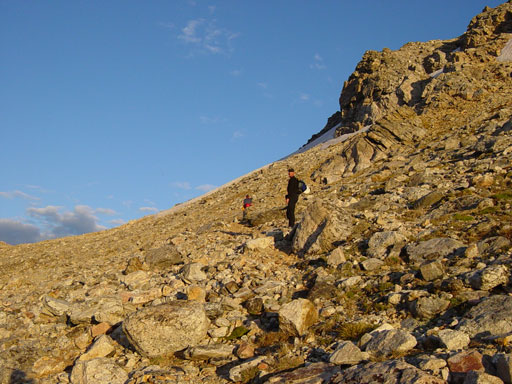 We left for the summit at 5:00 AM the next morning.  It's about 7:00 AM here as Eric and Jerry head up to the saddle between South and Middle Tetons. 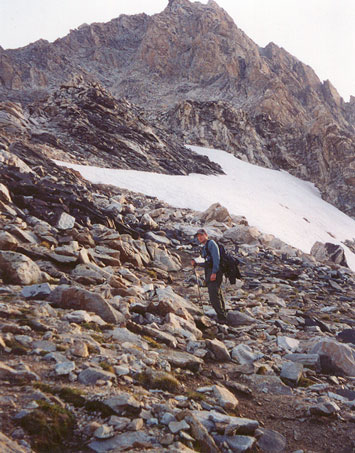 Just above the saddle, Alan rests before climbing up to the southwest couloir of the Middle Teton in the background. 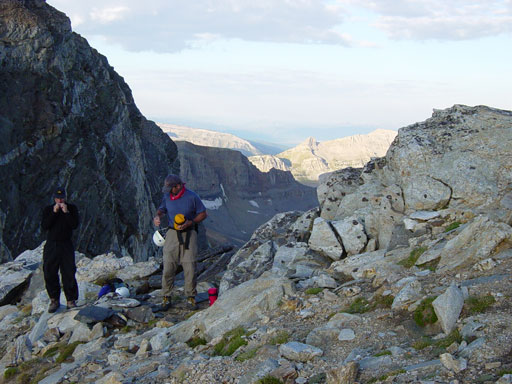 At the same time, Eric and Jerry take a break and enjoy a snack before the long climb.  It took us about 2 1/2 hours to reach the saddle via a faint climbers trail. 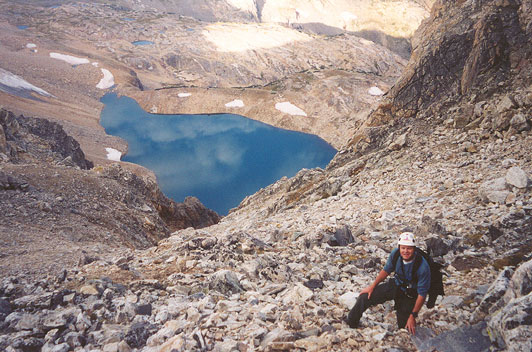 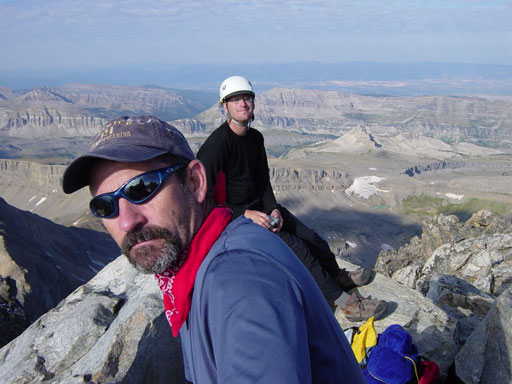 Jerry and Eric enjoy a windless summit.  As a special treat, it was Jerry's birthday.  We celebrated with a Clif Bar cake and by singing "Happy Birthday!"  Jerry turned 50 that day and was glad he was on a summit to celebrate. 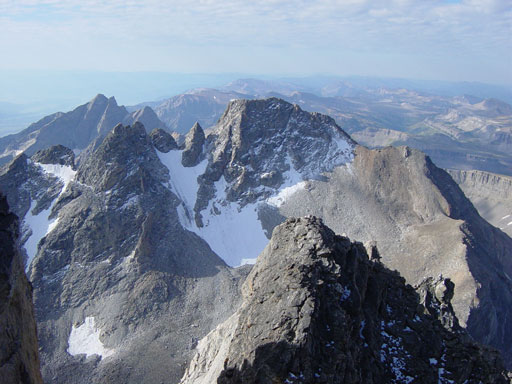 From the summit we had spectacular views of the South Teton.  We originally planned to climb the South Teton also, but were turned back by ice and snow conditions. 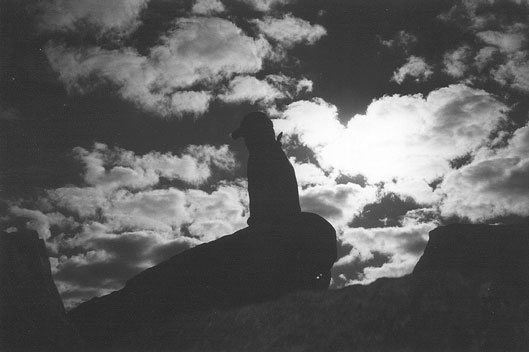 Eric took this cool B&W shot of Alan on the summit with the sun in the background.  It took us about five hours to summit from base camp. 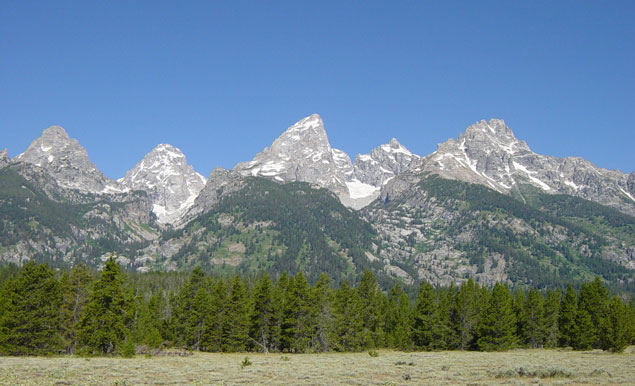 Finally, no story could be complete without a shot of all the Tetons.  Every year, we continue to drive the 20 hours or so from Oklahoma to climb these peaks.  The reason is evident.  These mountains are magnificant and continue to draw climbers like us year after year.  Thanks to Eric and Jerry for making this trip possible.  And, as always, thanks to the Middle Teton for a safe and enjoyable mountain experience.