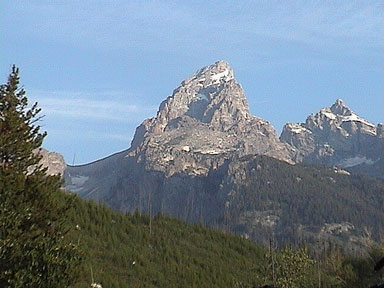 The Grand Teton (13,770 ft) is the highest mountain in the Teton Range. Located in NW Wyoming, approximately 50 miles south of Yellowstone National Park, Grand Teton National Park hosts one of the most spectacular mountain ranges in the lower 48. First climbed by William Owen and Franklin Spalding on August 11, 1898, this peak has drawn climbers for over 100 years. We were inspired in 1993 during a road trip through Wyoming. At the time, we were amazed by the Tetons and vowed to return and backpack the area. We never realized we would someday return to climb the Grand. The route we followed is the exact route pioneered by Owen and Spaulding in 1898. There are now over 90 routes and variations of routes to the summit. The Owen-Spalding route is considered the easiest, rated at 5.4, Grade II. Athough this is the easiest route, it is a technical alpine climb requiring training and experience in rock climbing, mountaineering, and the use of equipment of both. Or, if you lack experience and equipment, you can hire a local guide service who will provide what you need and guide you up the mountain. Exum Mountain Guides and Jackson Hole Mountain Guides have been guiding the Tetons for ages and are considered some of the best in the country. We chose to spend our money on gear, learn on our own, then do it ourselves. 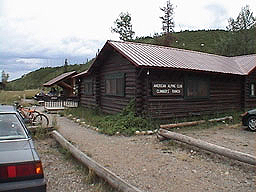 July 26, 2002: We arrived at the American Alpine Club Climber's Ranch four days before the climb. It stormed for two days while we hung around and got acclimated. On the third day a high pressure system moved in and cleared the skies for the next four days. 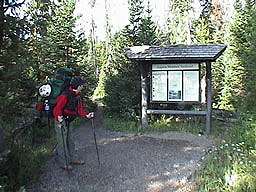 We hiked from the trailhead to the Meadows where we spent a night. The next day we did the arduous climb from the Meadows, through the upper moraine, up the class four fixed rope, then on to the lower saddle where we also camped.Along the trail we met a lot of hikers and climbers taking advantage of the good weather. We also ran into a black bear eating berries along the trail. At the lower saddle we met Dasch and Jereme from Oregon and decided to team up for the climb the next day. Now we had two ropes instead of one for the long rappel. Jackie stayed at camp while we climbed up to scout the approach. We wanted to figure out the "Eye-of-the-Needle" section in the daylight so we could do it 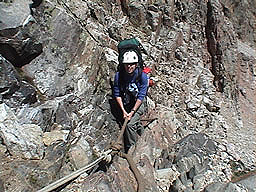 early the next day in the dark. That done, we returned to find that marmots had eaten most of Dasch and Jereme's food. After we gave them all the extra food we had, Dasch and Jereme 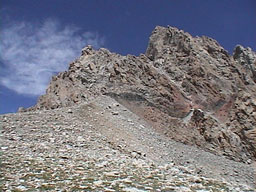 declared that would be enough to see them through the climb the next day. Summit Day: 5:00 AM and we're climbing. An Exum party was already about a half-hour ahead of us. We arrived at the upper saddle a couple of hours later after a long climb up a class three gully. This would be Jackie and Jereme's first technical alpine climb. Jackie has been outside a lot and has led 5.8, but Jereme had only been outside a couple of times. So Dasch and I took turns leading and bringing up the rear. I lead the "crawl" pitch and Jeremy led the "belly roll" pitch. A four-person rope team is slow.....really slow. There was ice and hail in the Owen chimney and also in the 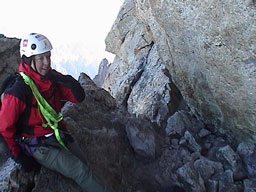 Sergeant's chimney which made climbing in hiking boots interesting. We summited around 1:00 in clear skies and began our descent. The rappel in 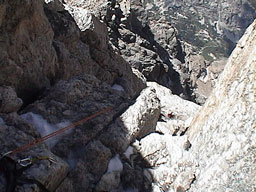 Sergeants chimney was a nice convenience and the rappel to the upper saddle was the best! We climbed down the gully and crashed in the tent at about 5:00 PM. Not exactly a record. We hiked to the trailhead the next day and met a huge black bear in the stream next to the footbridge near the parking lot. After pizza and beer, we checked into a nice hotel. A great climb! Thanks Dasch and Jereme for a great team and .............thanks Grand Teton for a wonderful experience!


BTW: A common mistake is for people to call the Teton Range "The Grand Tetons." The proper term is "the Tetons" or "the Teton range." The Grand Teton is a single mountain and deserving of distinction.


For more info on climbing the Grand Teton, click this link to my Grand Teton Page on SummitPost.org. 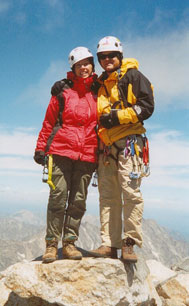