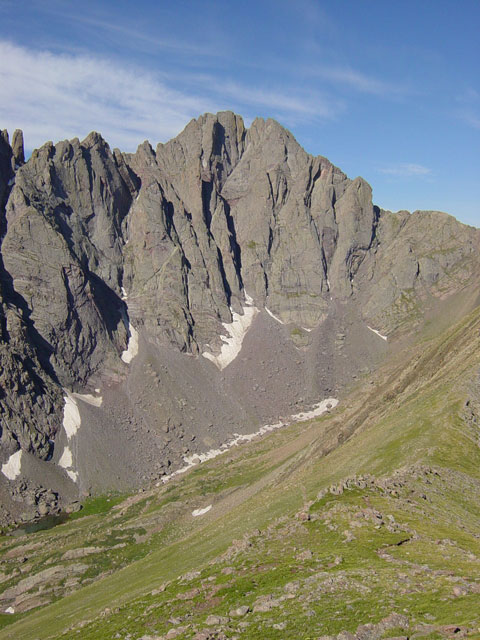 Crestone Peak is a spectacular mountain in the heart of the Sangre de Cristo range of the southern Colorado Rockies.  It is one of Colorado's 54 fourteen thousand foot mountains and ranks seventh in the state in overall height.  Crestone Peak is a challenging peak for the novice peakbagger.  The easiest route is a class 3 scramble via a 1500 foot gully called the Red Couloir.   A SummitPost friend, Andy, agreed to meet me and climb this mountain.  It would prove to be a great day and a great climb.  So join Andy and I for a wonderful day of climbing on Crestone Peak. 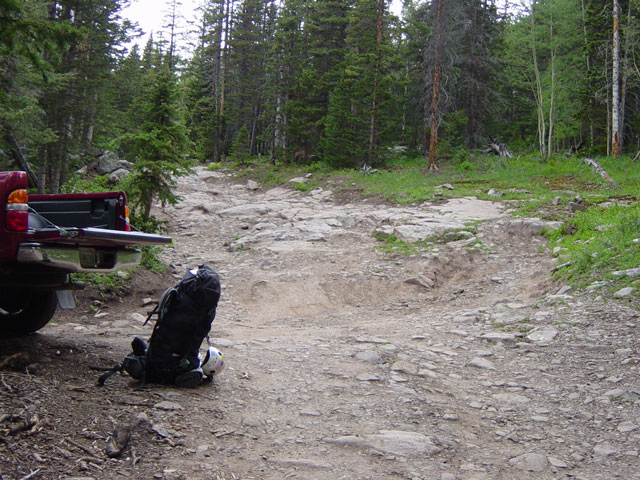 The road into base camp is (was) the first hurdle to a Crestone Peak climb.  It is a very rough five miles of four-wheel drive road which has claimed many a vehicle.  It isn't the kind of road you want to drive your vehicle on if you have a new Titlemax Missouri title loan or an expensive car payment.  My little Toyota made it about four miles up the road and was eventually stopped by this rock slab.  This rough road was improved in 2010, but is is now closed at the Rainbow Trailhead approximately 4 miles from South Colony Lakes. 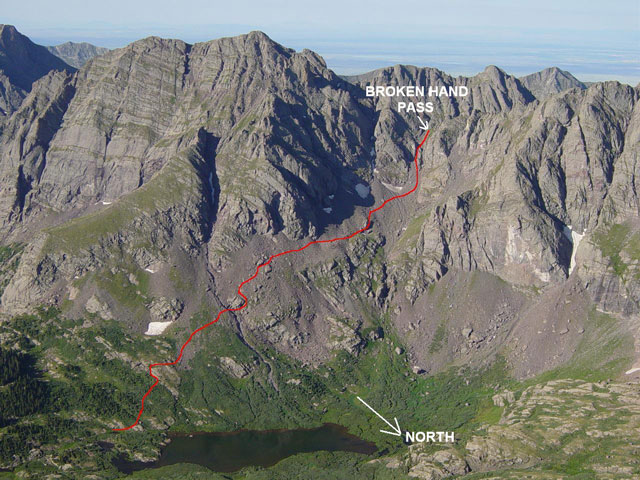 Once you reach the end of the road, a climb up to Broken Hand Pass is in order before you even reach the mountain.  This is a 1500 foot climb to a pass, followed by a 600 foot descent to the next valley to get to the base of the mountain.  This photo was taken from the top of Humboldt Peak the day before.  Lower South Colony is the lake in this photo. 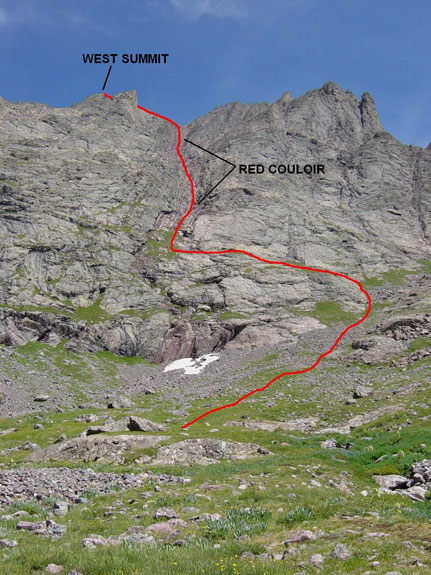 After your descent from Broken Hand Pass, you will need to hike about a half mile to the far west side of Cottonwood Lake to get to the base of the mountain.  From there, you will see the south face where you must then ascend 2000 feet through the Red Couloir to the summit. 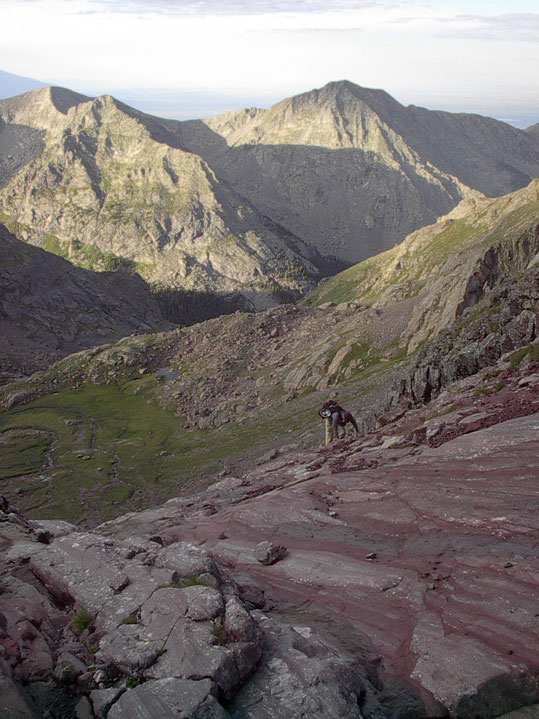 Alan scrambles up the Red Couloir about half way up.  You can see how the Red Couloir gets it's name.  This is a classic class 3 route requiring occasional hand holds, but no ropes or other equipment. 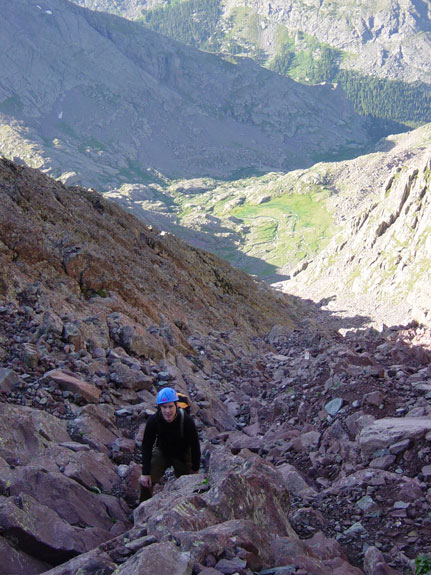 Andy nears the top of the couloir.  The couloir has loose rock and caution must be used not to kick rocks down on other climbers. 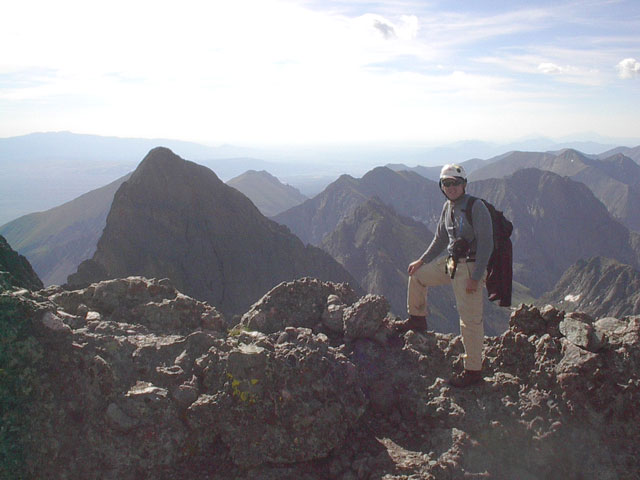 Finally on the summit after a four hour climb.  The couloir was long, but a lot of fun.  Crestone Needle is in the background.  James Lee and I climbed the Needle two years prior.  This area is full of fun mountains to explore. 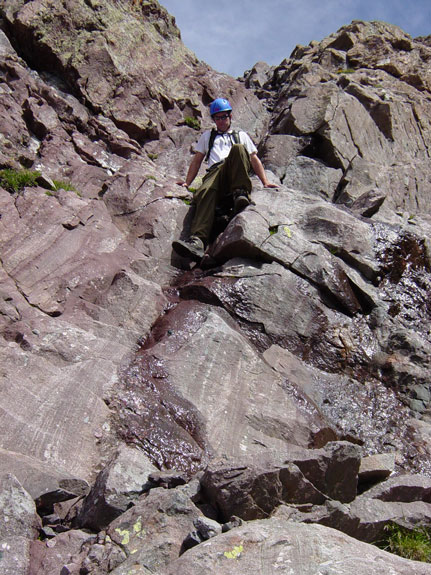 Andy descending the peak on one of the steeper sections.  It took about two hours to climb down the couloir. 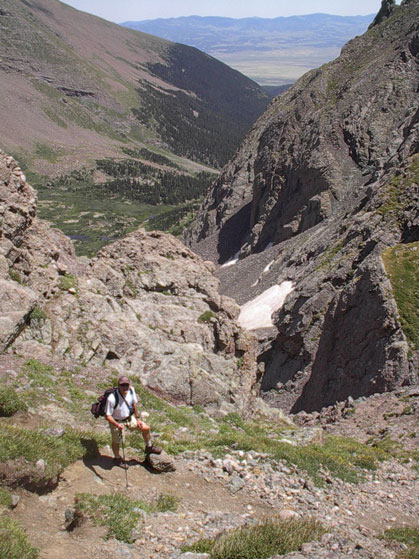 Alan at the top of Broken Hand Pass getting ready to descend back down to camp toward the valley in the background. 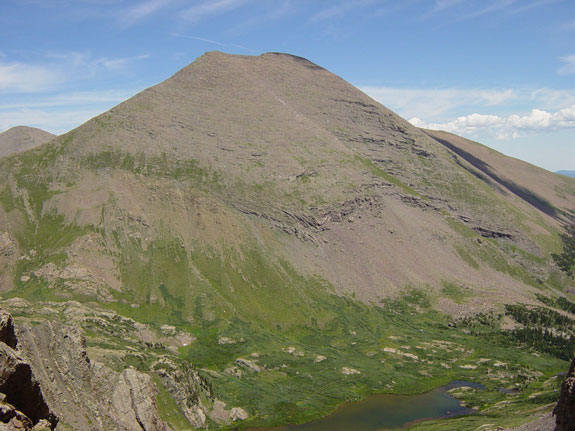 Spectacular views of Humboldt Peak were our company as we made our way down from Broken Hand Pass to our camp.  I climbed Humboldt Peak the day before.  It is a relatively easy hike to the summit and it is also a Colorado 14er. 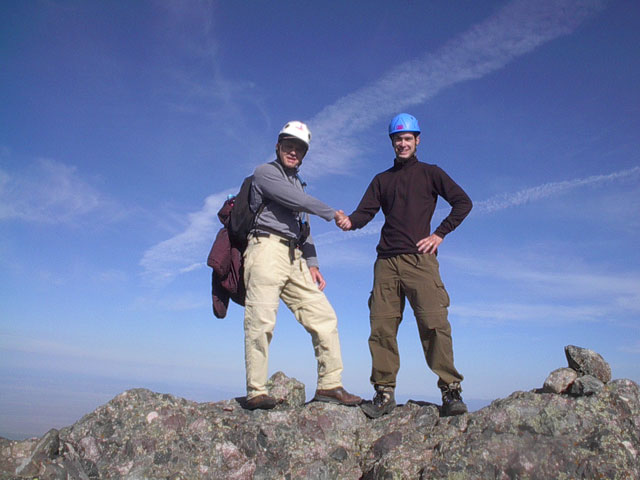 Alan and Andy on the summit together.  What a fantastic day in the mountains.  We were blessed with good weather and made the climb and return in nine hours.  Thanks to Andy for coming down and climbing with me and, as always, thanks Crestone Peak for a great day.

All pictures of Alan were taken by Andy Leach.