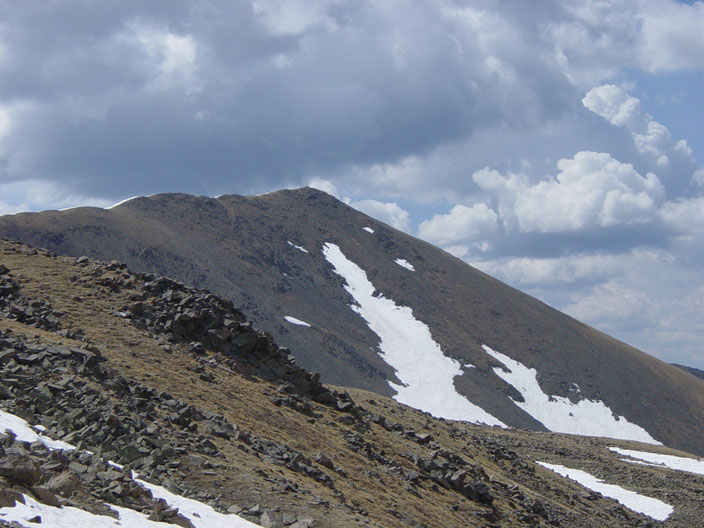 Wheeler Peak is the highest point in New Mexico.  It sits in the southern end of the Sangre de Cristo (Blood of Christ) range of the Rocky Mountains.  Wheeler rises 13,161 feet over the Enchanted Circle of Taos, Red River, Eagles Nest, and Questa, New Mexico.  The mountain was named for Major George Wheeler who surveyed much of New Mexico and other areas in the southwest.  Wheeler Peak can be obtained by several trails, the most popular being either the Bull-of-the-Woods or the Williams Lake trails.  We chose to try the Bull-of-the-Woods trail.  It's 7.2 miles to the summit, is less steep, and more scenic.  The Williams Lake trail is much shorter, but also much steeper.  As you will see, we ended up using both routes.  But enough talk...lets get to the pictures! 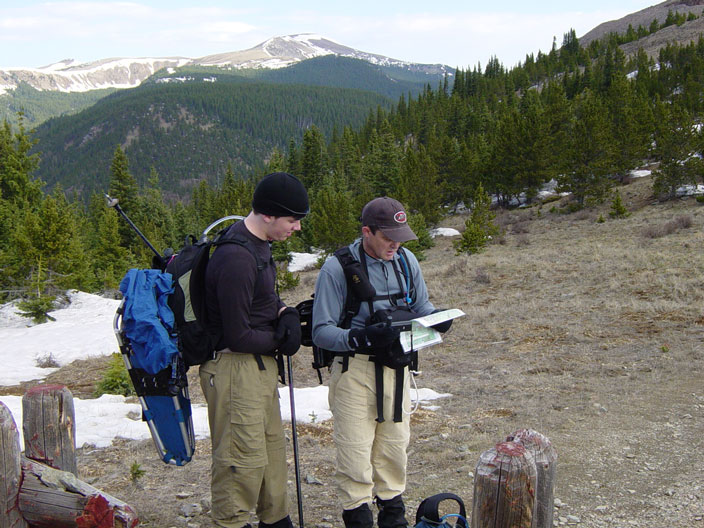 About 3 miles up the trail, Alan and Andrew look at the map and the GPS.  The expected snow on the trails made route finding a bit of a challenge.  This shot was taken at the famous wooden fence above Bull-of-the-Woods pasture.  The peak in the background is Gold Hill, another popular hiking destination. 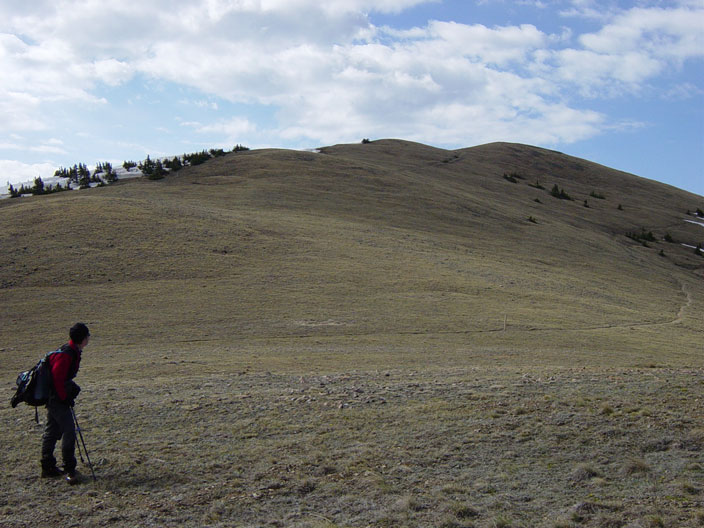 Jackie contemplates a traverse of Frazer Mountain, a rather easy section of the trail. 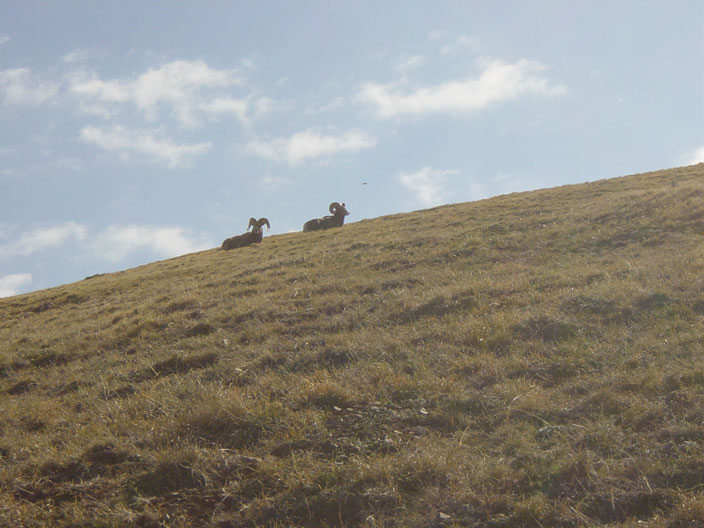 These big horn sheep were about 25 yards off the trail on Frazer Mountain.  After this, we saw an entire herd of about 20-30 sheep off in the distance. 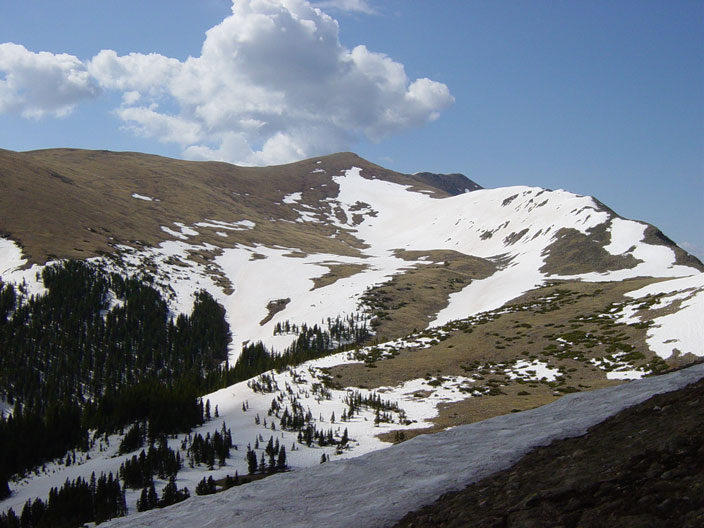 La Cal Basin.  This is normally a good place to camp if backpacking into the area.  The normal route descends into the basin, then climbs out the left side (note the faint trail zig-zagging up the left slope).  To avoid the snow fields, we opted to climb the ridge to the right.  The dome in the center is "Point 13,045" as shown on the 1/24 USGS quad.  You can see our first view of Wheeler Peak off in the distance to the right of Point 13,045. 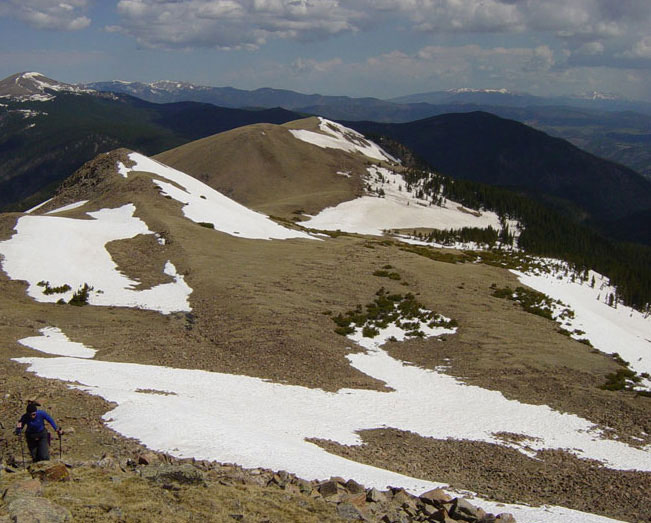 Jackie is climbing the rocky ridge on the west side of La Cal basin.  Careful route finding will avoid class 3 scrambling.  Frazer Mountain is in the center and La Cal basin is to the right. 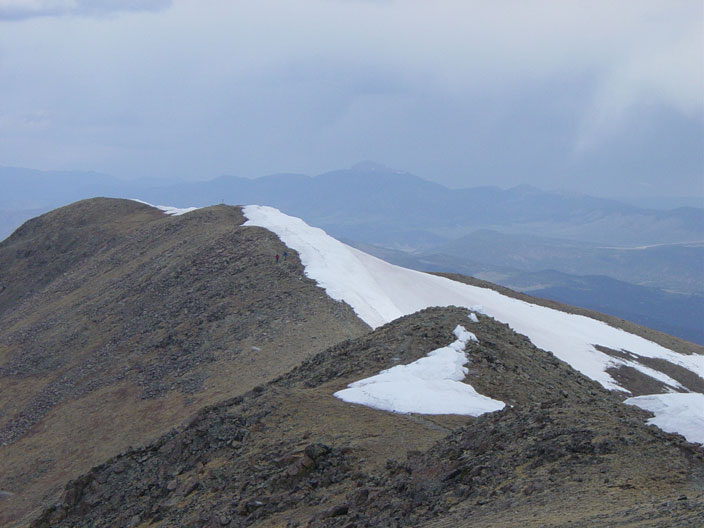 The view of the summit ridge, looking north, taken from the top of Wheeler.  Jackie and Andrew can be seen as tiny dots in the center as they make a slight descent from Mount Walter, then begin the final few feet to the summit of Wheeler.  Note the storm clouds above. 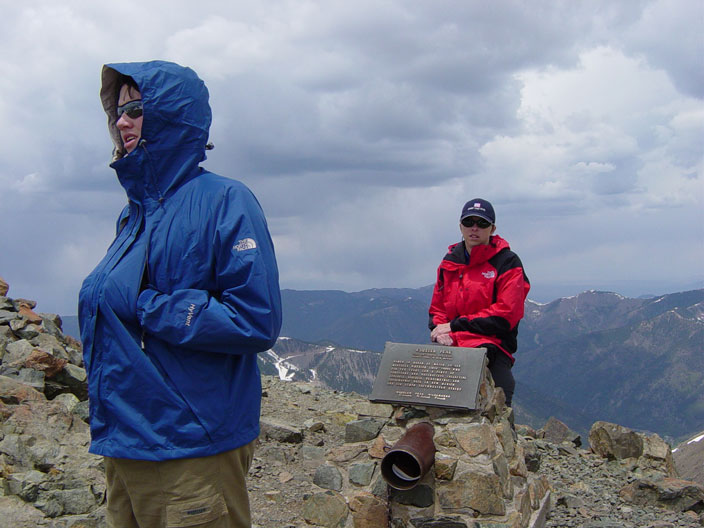 Andrew and Jackie on the summit watching the storms coming.  Our original plan was to descend the mountain via the same route; however, the impending storms changed our plans.  Descending the same route would have put us on the lighting-exposed ridge for over an hour.  Instead, we opted to descend via the shorter Williams Lake route to minimize our exposure to the storm. 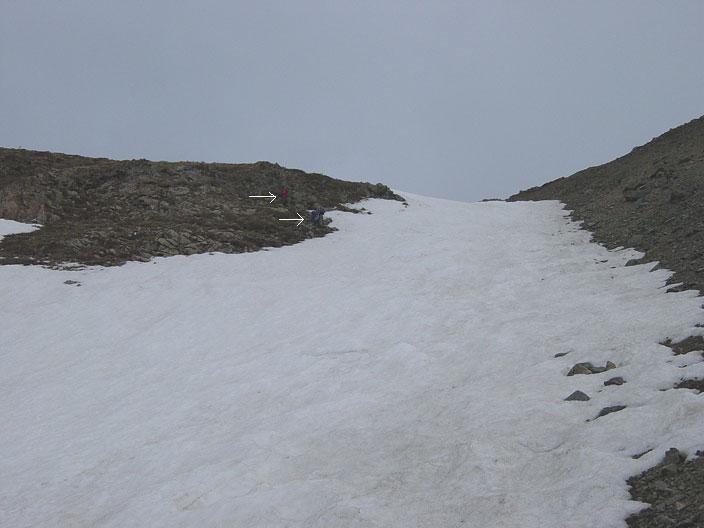 Andrew and Jackie (arrows) descending the steep west face of Wheeler, about to cross the snow slope.  This is a 2000 ft descent via scree and snow.  The fun was only beginning. 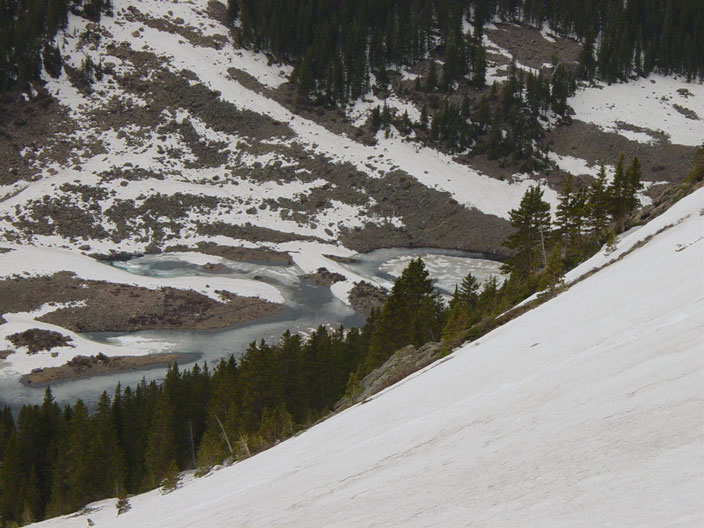 Alan turned and took this shot immediately after the one above.  Luckily, there was a snowless strip of rock which ran along side of the snow slope.  Glissading was an option, but the stability of the snow was in question, and it was too steep for our experience.  This is a good view of Williams Lake and the basin. 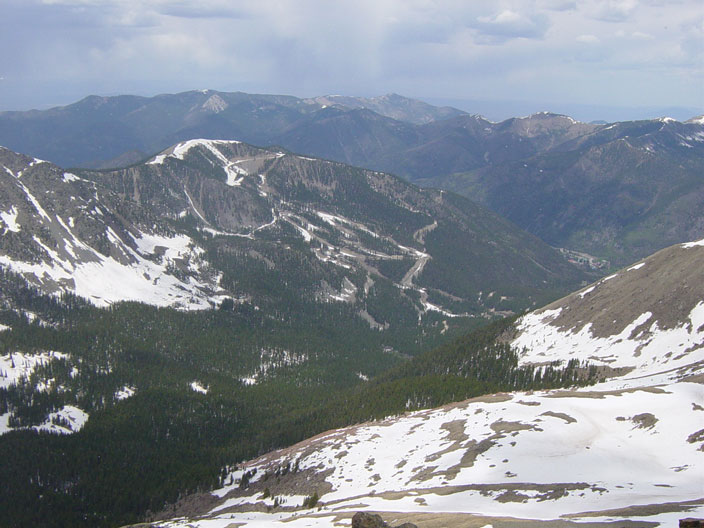 Spectacular views including this one of Taos Ski Valley.  And finally..... 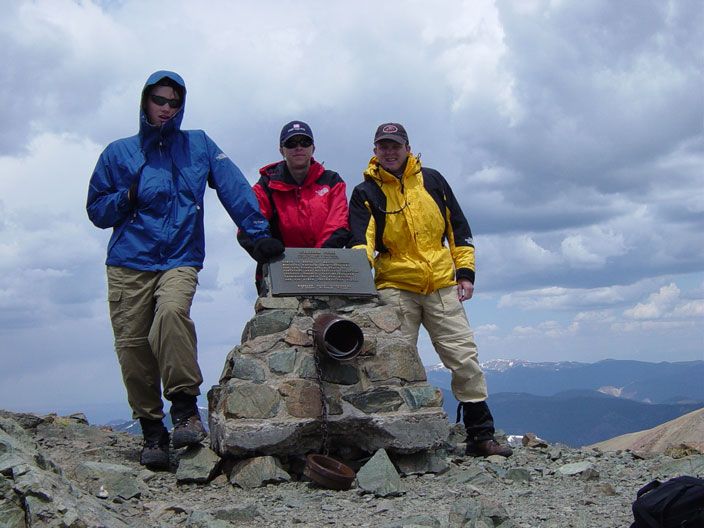 All of us on the summit!

From the summit to Williams Lake was a steep 2000 ft. route finding bushwhack with no trail.  After 1500 ft of wet grass and loose scree, we were eventually forced to endure a 500 ft descent through four foot snow drifts until reaching Williams Lake.  After reaching the lake, we had to traverse the steep banks of the lake, at times doing a few rock climbing moves over the icy waters.  Once reaching the north side of the lake, we snowshoed for three miles until reaching the trailhead.  Overall, it was a great adventure.  Thanks to Grant for calling us with the conditions the day before, and a special thanks to Marc Johnson who loaned us four pairs of snowshoes.  Those snowshoes saved the day!

For more information on climbing Wheeler Peak, feel free to click on this link to my Wheeler Peak page on www.SummitPost.org.