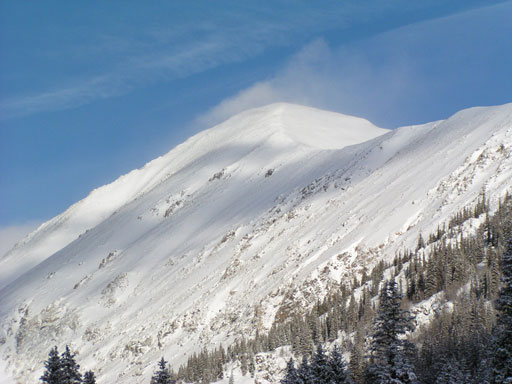 A winter climb of a high mountain has always been a goal of ours.  Quandary Peak is an excellent choice for a first winter mountain climbing experience.  Located near Breckenridge, Quandary Peak is the fourteenth highest mountain in Colorado.  It is a relatively easy climb in summer; however, it can be a challenge in winter.  A challenge is just what we got!  Along with several www.summitpost.com  friends, we had a wonderful day on a high Colorado peak.  Join us as we experience a Colorado 14er during the middle of winter. 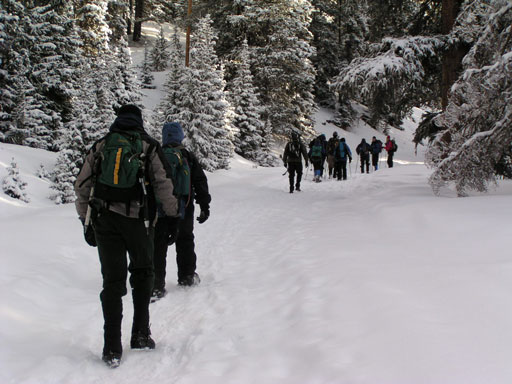 We begin our climb with our SummitPost friends.  Although we started together, we would quickly spread out all over the mountain.  It was only 5 degrees when we began.  This climb is about 4 miles and gains 3800 ft.
Photo by Barry Raven. 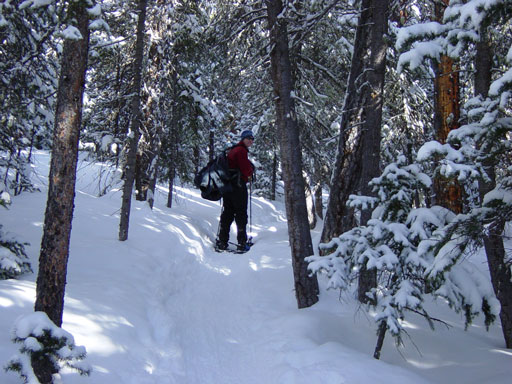 Snowshoes were the order of the day as Jackie hikes through the trees during the initial part of our climb. 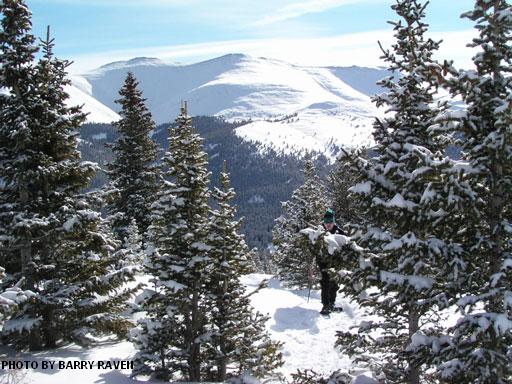 Alan peaks through the trees after reaching treeline at around 11,500 ft.
Photo by Barry Raven. 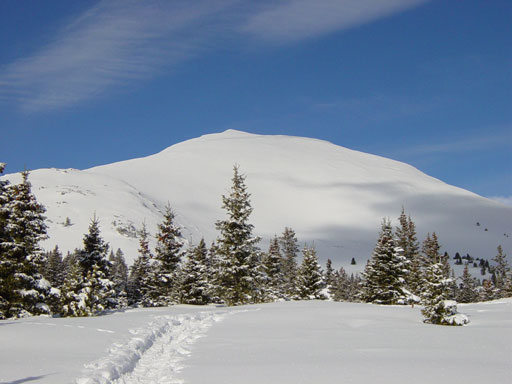 As we broke out of the trees, our first view of Quandary Peak was awesome.  Our route climbed the hill to the left, then followed the ridge to the summit.  The fun was just beginning! 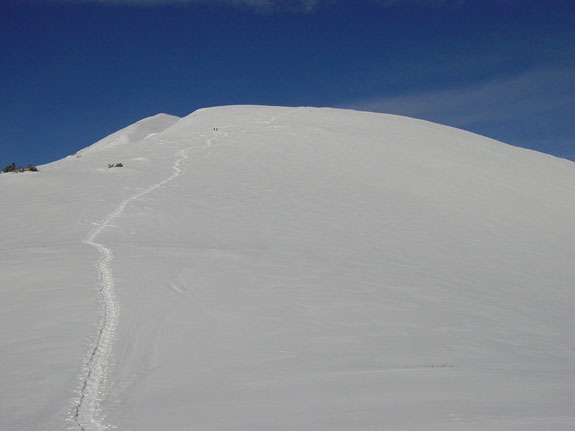 A long climb up the slope was required to reach the summit ridge.  See the tiny dots of climbers near the top of the slope? 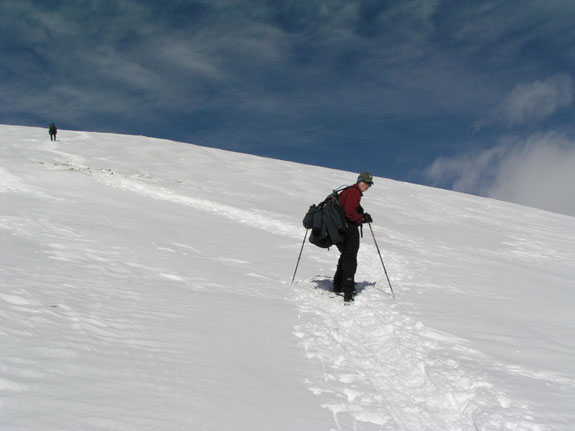 Jackie is in the middle of the long slope climb to the ridge.  Although it was only 15 degrees or so, she had to take off her coat because of the heat of the sun and the effort of climbing.
Photo by Barry Raven. 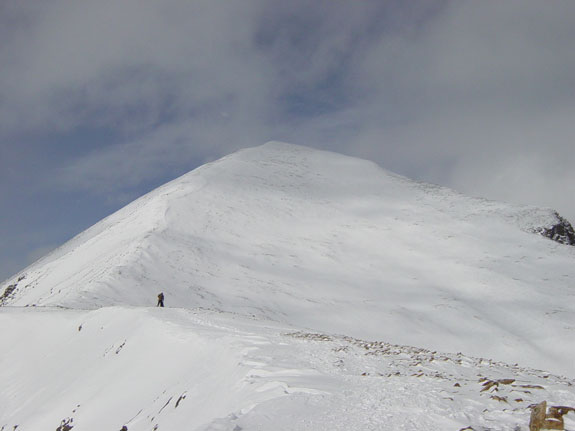 After reaching the top of the slope, the final ridge climb of almost 1000 ft. was required.  This final climb began at about 13,200 ft. and appeared to be a daunting task. 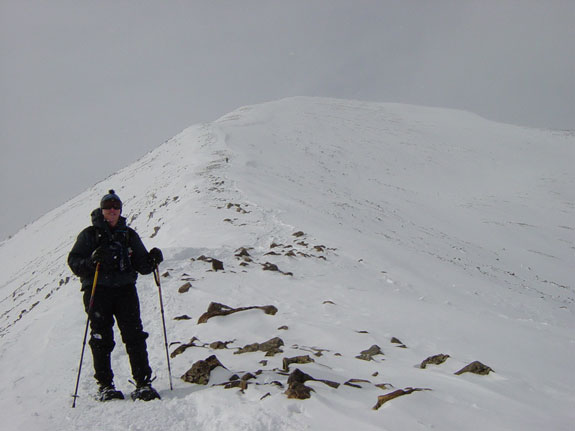 Jackie is on the final summit ridge.  By this time, energy and will power are ebbing.  With impending bad weather and the afternoon wearing on, we had to make a decision on whether or not Jackie would continue to the summit.  Another climber behind her and to the right is on the ridge to the summit. 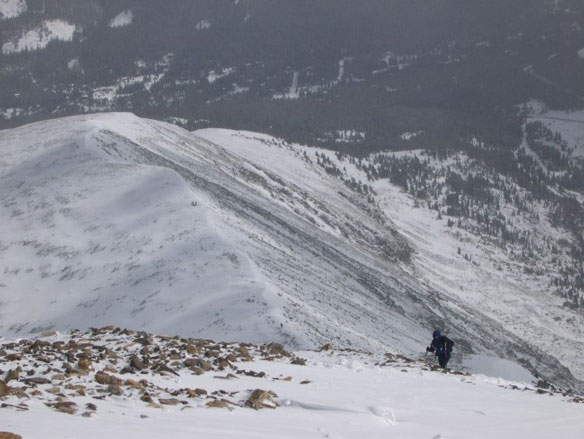 Alan climbs the last few hundred feet to the summit.  Climbers can be seen as tiny dots to the left and below him on the ridge.
Photo by Kane Engelbert. 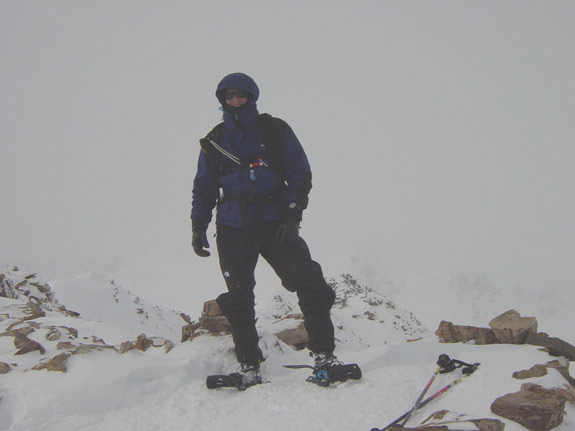 Alan reaches the summit in marginal weather.  As Jackie always says, "Summiting is only half the battle."  So now its time to get down before we run out of daylight.
Photo by Jim Haley. 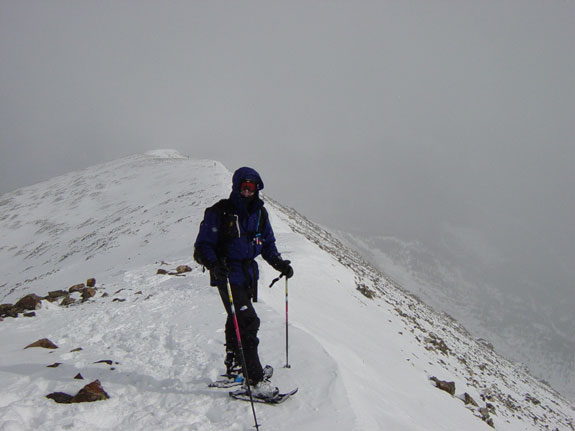 About halfway down the ridge, Alan meets Jackie and she snaps this photo.  The weather is getting worse and the afternoon is wearing on towards dusk. 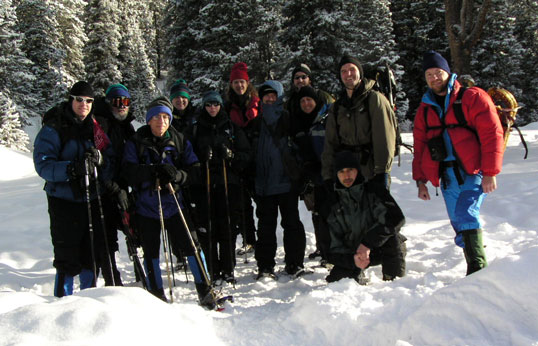 Our SummitPost friends and climbing group.  Of the thirteen climbers (twelve shown here), six decided to turn around for various reasons before reaching the summit.  Unfortunately, Jackie elected to turn around about 600 feet from the summit due to impending darkness and bad weather.  That was a good decision and the mountain will always be there to climb another day.  Quandary Peak is a great first winter mountain climbing experience.  Thanks to Quandary and our SummitPost friends for a great day!   Photo by Barry Raven. 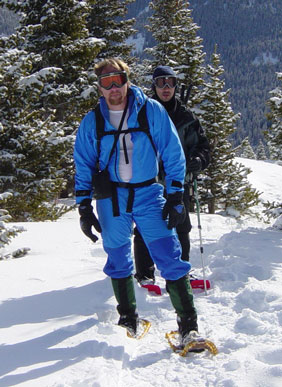 Thanks to our friends, Barry Raven (above) and Kane Engelbert for the use of their photos.