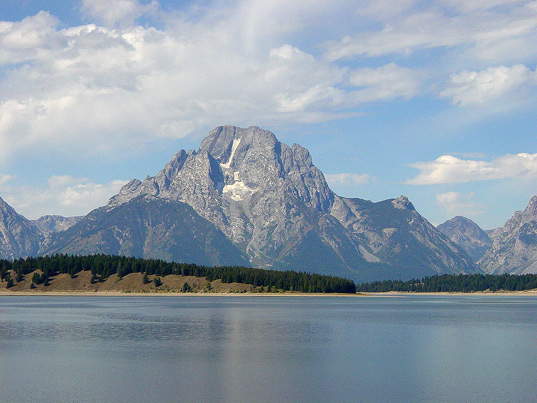 Mount Moran is a solitary behemoth in the Teton Range of Wyoming.   Unlike the central cathedral peaks like the Grand Teton and Middle Teton, Mount Moran stands alone, guarding the north entrance to Grand Teton National Park.  In July 2003, Jackie and Alan attempted this mighty peak, but were thwarted by illness about halfway up the mountain.  Afterward we vowed to go back and take care of some unfinished business.  Mount Moran does not give up it's summit easily.  It has the most difficut standard routes of the entire Teton range.  Climbing Mount Moran usually takes three days, and good weather and proper gear is a must.  Unfortunately, Jackie did not get to join us on this climb, so follow along with Alan, Andy, Barry, and Eric as they climb the CMC route of Mount Moran and tackle one of the Tetons most challenging mountains.

Click here to see an 18 minute movie of the entire climb.

Many people are able to climb at 12,000 ft mountain but others have trouble even walking up a flight of stairs. Small elevators for homes have gained in popularity in recent years. Home elevators come in various sizes so they can be installed in nearly any type of residence. 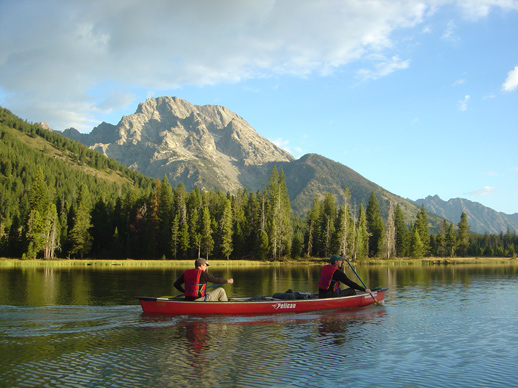 The first part of our climb involved an almost two hour canoe paddle across Leigh Lake.  Here, Alan and Eric enjoy views of Mt. Moran during the paddle across the lake. 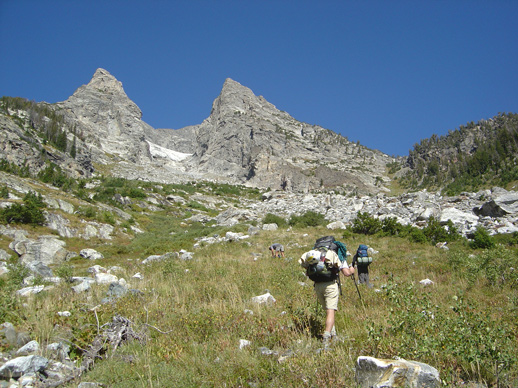 After the canoe, the approach to base camp involved a 3000 ft. climb with full packs.  The east and west horns of Mt. Moran are seen above. 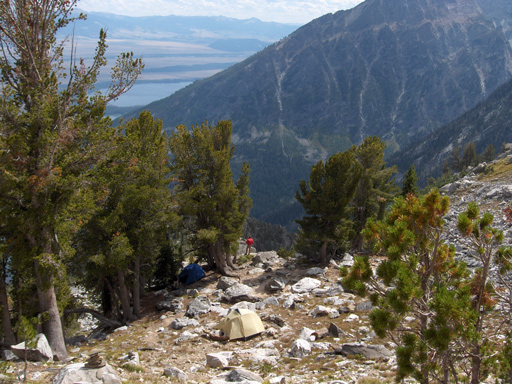 Base camp is called the CMC camp and is considered one of the best high camps of the range.  CMC stands for the Chicaco Mountaineering Club whose members first climbed the route in 1941. 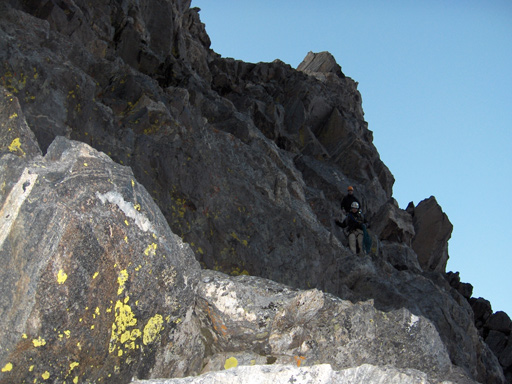 The next morning, one of the first obstacles is a down-climb of a 100 ft cliff called Drizzlepuss.  Here, Alan and Andy negotiate the ramps while heading toward the rappel station. 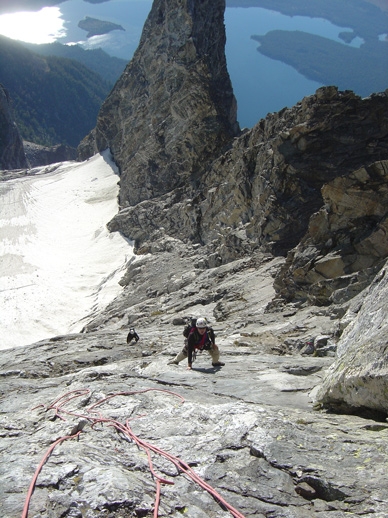 Alan leads pitch 2 of the climb.  The route is considered class 5 which involves ropes and rock protection hardware.  You can now see the Drizzlepuss cliff in shadow above and to the right of Alan. 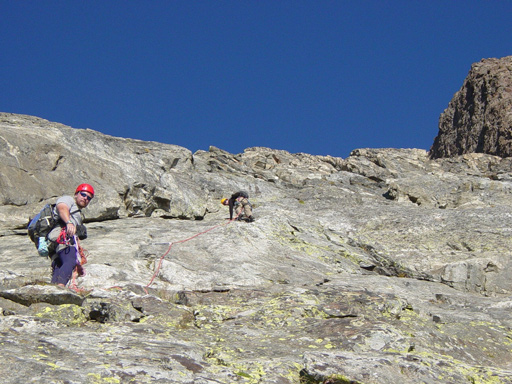 Andy (right) leads pitch two while Barry follows.  The prominant "black dike" formation can be seen to the right. 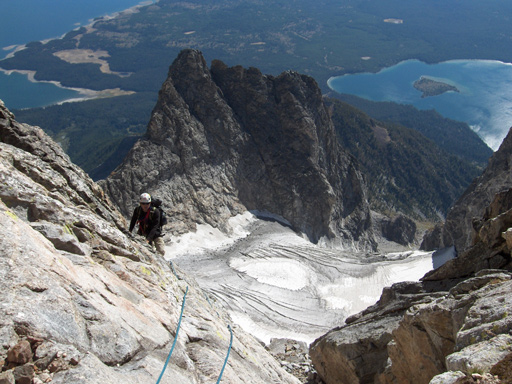 Alan is on pitch three of the climb with the Falling Ice Glacier below him. 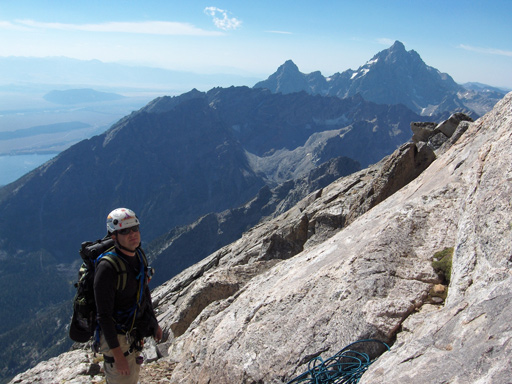 Alan nears the summit with the north face of the Grand Teton off in the distance. 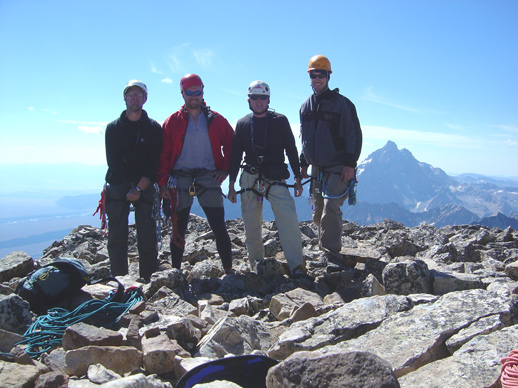 On the summit!  Left to right: Eric, Barry, Alan, and Andy.  The north face of the Grand Teton in the background. 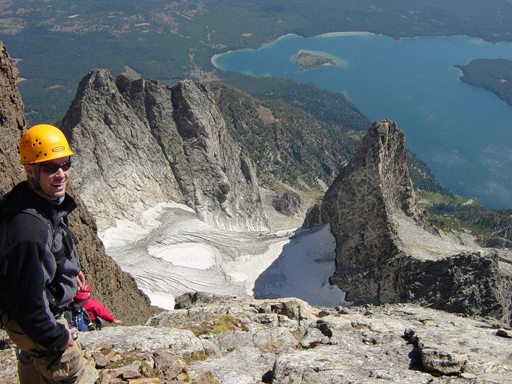 Andy and Barry (red) begin the descent off the mountain with East Horn, West Horn, Falling Ice Glacier, and Leigh Lake below. 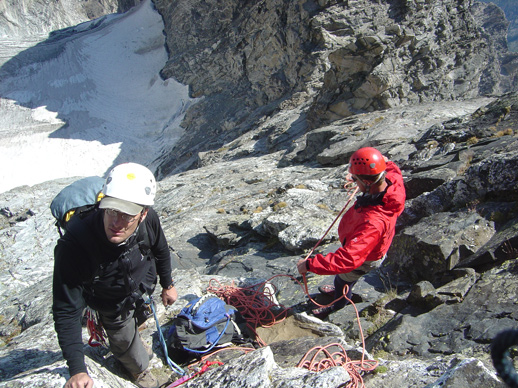 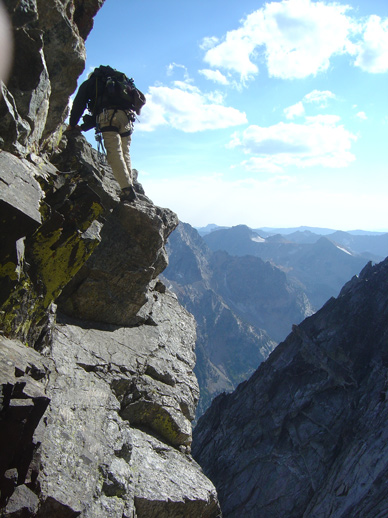 Alan climbs up Drizzlepuss.  After our rappels, the crux of the descent off the mountain is re-climbing the 100 ft Drizzlepuss cliff.  Afterward is the long 4500 ft down-climb and hike back to our canoes on Leigh Lake.


The photos, trip stories, route descriptions, or any other information on this site are INACCURATE AND SHOULD NOT BE USED, or used at your own risk. 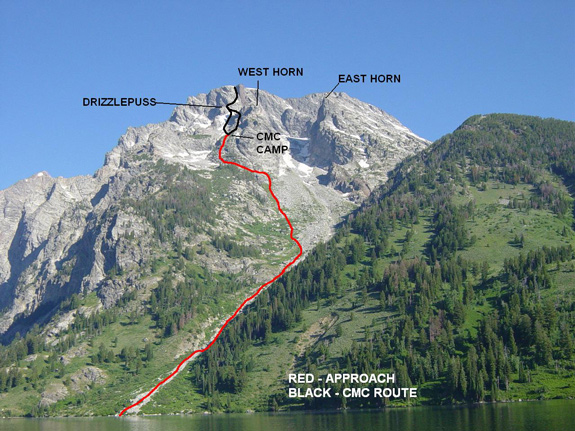 This a general overlay of our route. 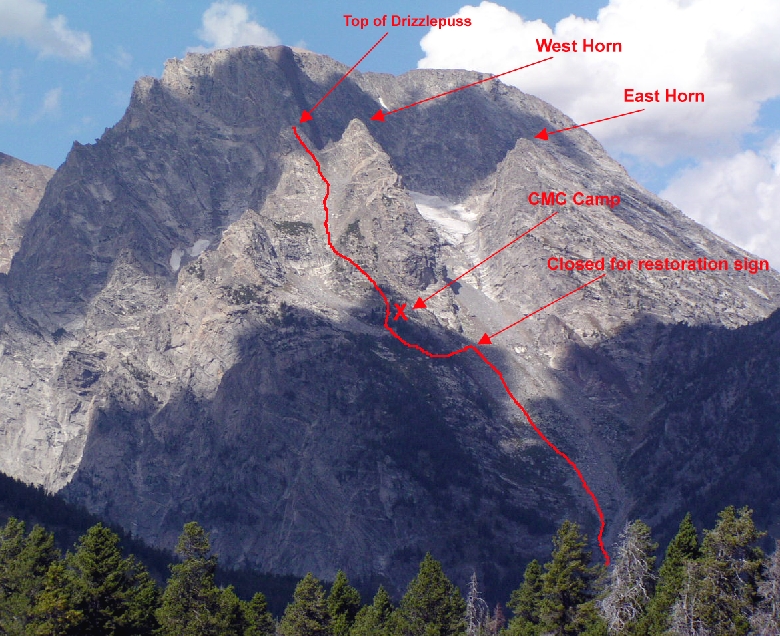 Another topo of the route by Barry Raven 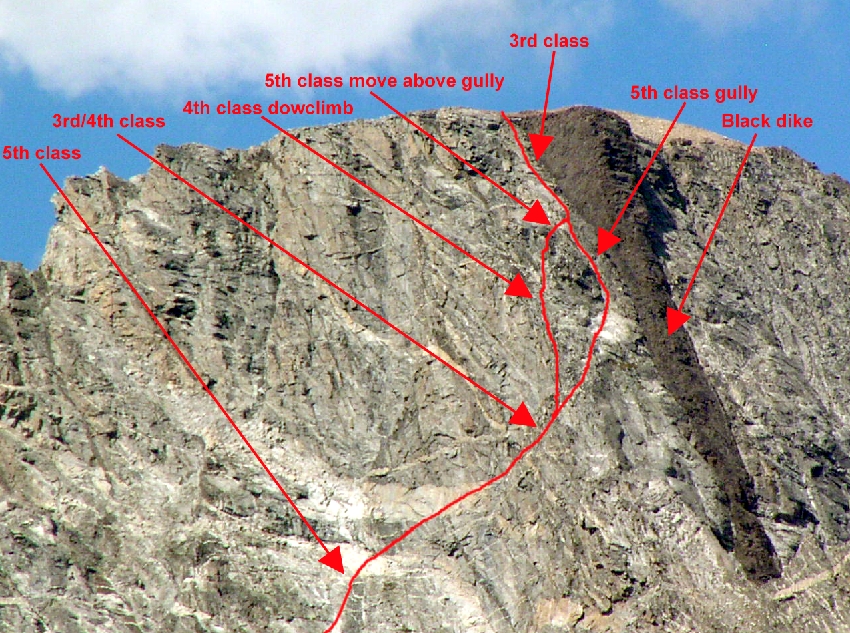 Topo of the CMC face by Barry Raven 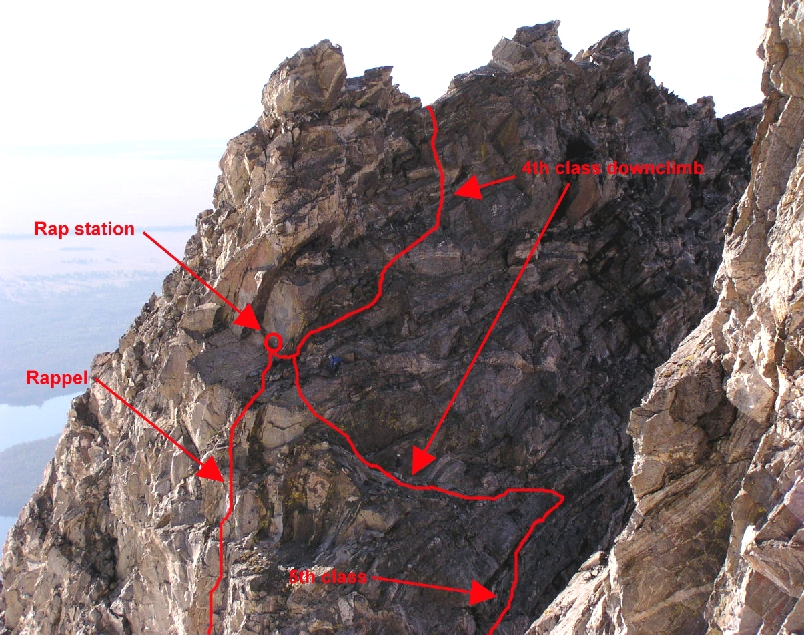 Topo of Drizzlepuss which is the crux of the route.
Photo by Barry Raven

The CMC route starts with a 3000 ft climb to base camp (CMC camp), followed by a 1500 ft scramble to the top of Drizzlepuss, then a 1000 ft roped climb of the CMC face.  Our summit day on the face was 16 hours round-trip.  Luckily, we were blessed with great weather and perfect conditions.  Thanks to Andy, Barry, and Eric for making this trip possible and for the use of their photos.   And as always, thanks to Mount Moran for a safe and successful day.

Click here to see an 18 minute movie of the entire climb.